The Science of Taste

Purpose of this research is to layout scientific basis for rigorous approach to sensory lexicon, instead of previously used intuitive approach. See also: tastescience.com, 2015

In the common language, the word “taste” is often used to describe sensations arising from the oral cavity. However, the biological definition of taste, or gustation, is narrower and includes only sensations mediated by a specialized anatomically and physiologically defined chemosensory gustatory system. Along with taste sensations, food usually simultaneously evokes other sensations, e.g., odor, touch, temperature, and irritation. Although it is not always easy to separate all these sensations perceptually, the nongustatory components are sensed by different systems, olfaction and somatosensation. Source: Taste Receptor Genes, 2007

Odors often produce different sensations when presented in front of the nose or intraorally, when eaten. It is a long-standing question whether these differences in sensations are due, for example, to the additional mechanical sensations elicited by the food in the mouth or additional odor release during mastication. ... The differences between ortho- and retronasal perception of odors are thought to be, at least partly, due to absorption of odors to the olfactory epithelium, which appears to differ in relation to the direction of the airflow across the olfactory epithelium. Source: Retronasal Perception of Odors, 2008

Type of sensations and receptors

See also: List of gene receptors First parf of the table taken from: The receptors and cells for mammalian taste, 2006.

Challenges in taste research: present knowledge and future implications, 2003
Abstract: This chapter gives a brief survey on the chemistry of gustatory taste sensations, i.e. the perception of the basic tastes modalities sour, sweet, salty, bitter as well as umami, and lingual somatosensory sensitivity resulting from temperature and tactile stimulation as well as chemical activation of chemosensory receptors. Some of the present challenges facing researchers in taste chemistry and biochemistry are presented and future perspectives are discussed.

A study of the science of taste: On the origins and influence of the core ideas, 2008
Abstract: Our understanding of the sense of taste is largely based on research designed and interpreted in terms of the traditional four “basic” tastes: sweet, sour, salty, and bitter, and now a few more. This concept of basic tastes has no rational definition to test, and thus it has not been tested. As a demonstration, a preliminary attempt to test one common but arbitrary psychophysical definition of basic tastes is included in this article; that the basic tastes are unique in being able to account for other tastes. This definition was falsified in that other stimuli do about as well as the basic words and stimuli. To the extent that this finding might show analogies with other studies of receptor, neural, and psychophysical phenomena, the validity of the century-long literature of the science of taste based on a few “basics” is called into question. The possible origins, meaning, and influence of this concept are discussed. Tests of the model with control studies are suggested in all areas of taste related to basic tastes. As a stronger alternative to the basic tradition, the advantages of the across-fiber pattern model are discussed; it is based on a rational data-based hypothesis, and has survived attempts at falsification. Such “population coding” has found broad acceptance in many neural systems.

The science of taste, 2014
Abstract: An understanding and description of our sensory perception of food requires input from many different scientific disciplines: in addition to the natural and life sciences, human sciences, social sciences, as well as the arts each contributes their perspective on what we call taste. For the natural sciences, the key concept is flavor encompassing all physical, chemical, and neurophysiological aspects. For researchers in human sciences, psychology, anthropology, and social sciences, taste is a broader concept related to tradition, geography, culture, as well as social relations. For cooks and practitioners, taste is a multimodal facet of food and the way we perceive and enjoy it. An interdisciplinary symposium on The Science of Taste brought together in August 2014 researchers and practitioners who deal with taste from many different perspectives with an aim to provide a composite mosaic of our current understanding of taste. 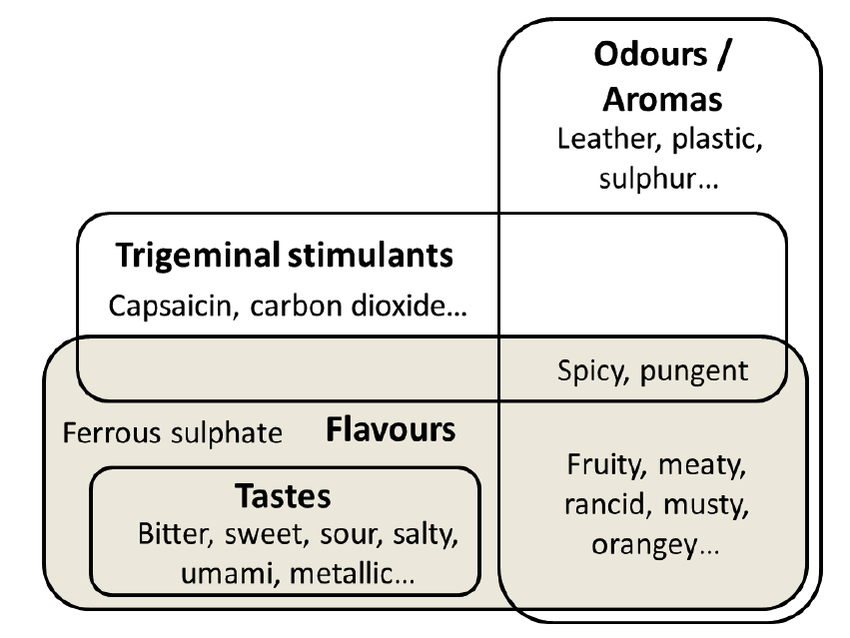 Taste, flavour, trigeminal, and odours descriptors. Note that the only flavour that cannot also be smelled orthonasally is, apparently, ferrous sulphate (see Lawless et al., 2004). Abstract: People’s use of the terms ‘taste’ and ‘flavor’ is often confusing, both in everyday use and in the academic literature. Failure to distinguish these ‘basic’ terms is likely to slow the development of our understanding of the chemical senses, currently a rapidly growing area of study in perception science. Our aim here is to defend the idea that, ultimately, it doesn’t make sense to treat experiences of the putative basic tastes, such as ‘sweetness’ and ‘sourness’ in our everyday experience as tastes. Rather, we suggest, the evidence supports the view that they should be treated as flavors, just like ‘fruity’ or ‘meaty’. Here we highlight the pervasive nature of the confusion between tastes and flavors, and outline a number of reasons for its occurrence, linked to the topics of attention and oral referral. We then provide psychological, physiological, and philosophical reasons to support the stance that tastes should be classified as a sub-component of flavors and show how doing so helps to dissolve certain debates.

References: Beer flavor terminology, 1979.
Reference standards for beer flavor terminology system, 1982.
Sensory evaluation of the mouthfeel of beer, 1991. The beer flavor wheel was developed in the 1970s by Morten Meilgaard. It was subsequently jointly adopted as the flavor analysis standard by the European Brewery Convention, the American Society of Brewing Chemists, and the Master Brewers Association of the Americas.

In 1995 SCAA created coffee flavor wheel. What coffee professionals may not know is that the flavor wheel was created as a visual tool to accompany The Coffee Cupper’s Handbook. Each term was very purposefully put in place to represent the weight of the molecules that they were meant to represent.

Reference: Coffee Taster’s Flavor Wheel — not a scientific research. In 2013 Counter Culture Coffee made own version of coffee flavor wheel.

Flavor Lexicons, 2003
Abstract: Flavor lexicons are a widely used tool for documenting and describing sensory perception of a selected food. Development of a representative flavor lexicon requires several steps, including appropriate product frame of reference collection, language generation, and designation of definitions and references before a final descriptor list can be determined. Once developed, flavor lexicons can be used to record and define product flavor, compare products, and determine storage stability, as well as interface with consumer liking and acceptability and chemical flavor data.

A System for Classifying Sensory Attributes
Abstract: Data from a descriptive analysis panel sometimes fails to detect differences between products for one or more sensory attributes. Results might nonetheless be consistent with the best possible data; lack of discrimination could be meaningful information if no true sensory difference exists between products for the attribute, which might occur when all products fall within one just-noticeabledifference (JND) interval (Castura et al., 2006).
A panel leader sometimes has prior knowledge of a product group and what level of performance is possible for particular sensory attributes within the product context. This information can help the panel leader to focus training in a relevant manner.
Systematic classification of sensory attributes based on the difficulty associated with identifying and scaling the attribute in specific product contexts can make this information available to the broader community of sensory practitioners.